Our sweet friend MANGO crossed the bridge today.  He will be missed by many pups and humans.  Our love goes to his very loving and caring mommy!  We are at a loss for words. 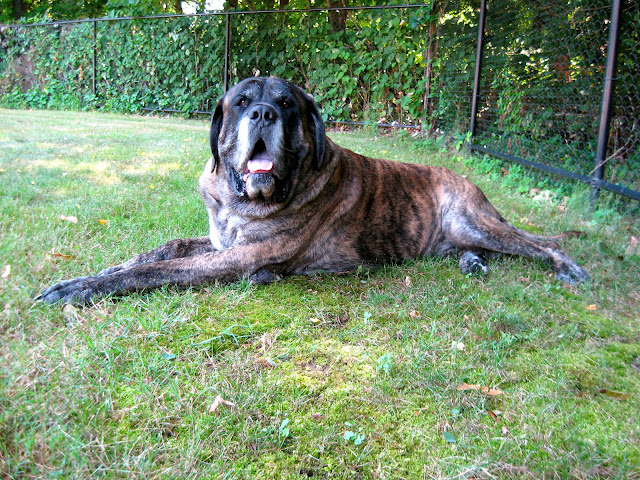 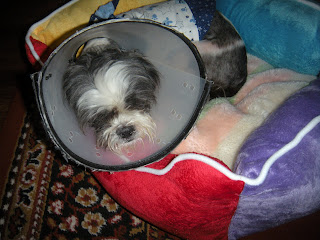 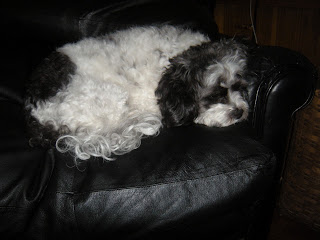 Another Surgery, Another Day, Improvement? 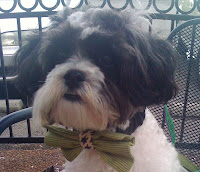 Checkers reporting here  -   It has been several stressful days here at the home of the Black & White doggies.   On Saturday morning mom woke up to find the little guys bed with a lot of blood in it.  As you can imagine she totally freaked out.   Daddy was a little bit more calm but not much.  He had someplace to go so it was left up to mom to get him to the vet.

Mom ran back to her closet to put on some clothes.  She was in such a hurry that she put her shirt on inside out and backwards  BOL! and her pants were inside out.  She didn't notice at all!  She scooped the little guy up and off to the vet she went.    BTW, she was not worried about offending my sensitive feelings by including me, she just took the little guy and left me here ALL BY MYSELF!

Now - this is hearsay as I was not there to observe - but she ran into the vet screaming  "I have an emergency, I have an emergency!"  Our vetty's being the professional, kind and caring kind  took the little guy back IMMEDIATELY.   Dr. Watson said a suture had popped and the blood in the sack was leaking.  She told mommy this wasn't necessarily a bad thing but she felt like he needed more surgery   to find out what was really going on with that sack.   We don't have any pictures of this day.
_______________________________________

When mommy brought him home he was pretty stressed from all the poking.  They had tried to super glue him until Monday but it wouldn't hold because of all the blood.  So, mommy put him in his bed and obsessed over him.   This was the position he was in for all of Saturday and Sunday. 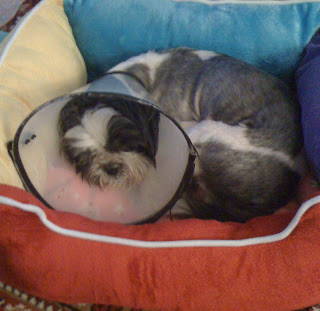 First thing Monday morning Mommy and Daddy took him back to the vetty! 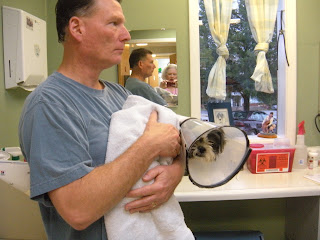 Dr. Watson took a look at his nethers.  She said the bruising looked better but he was still bleeding. 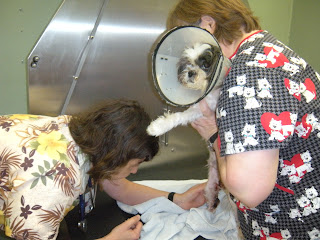 She took an even closer look to further degrade the little guy I'm sure!  She felt that she needed to get "in there"  to see what was going on! 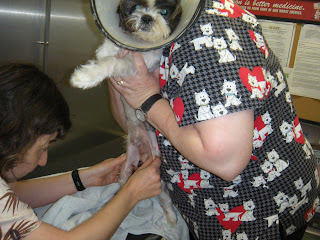 The little guy gave mom a look that said HELP ME!!!! 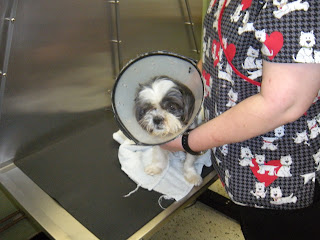 Mom and Dad left the little guy for some surgeries!  Dr. Watson called a couple of hours later to tell them he was out of surgery and doing fine!  She said they found several blood clots and got him all cleaned up in there.  Mom should pick him up around 5:00 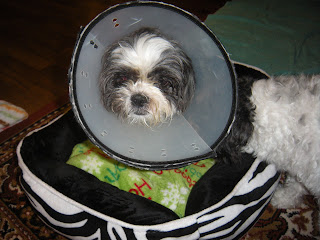 He was a little goofy because they had given him morphine, which I understand is pretty powerful stuff.  He wasn't sure whether to sit or stand!   But he was in good paws because, as you can see,  I'm checking out the area to make sure they did a good job!  For some reason Mom wanted me to stop! 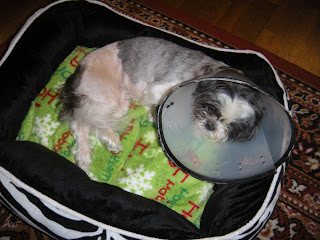 after sitting in mommy's lap for over an hour he zonked in his bed  [err that's MY BED]  He pretty much didn't move all night - except for mommy moving him into their bedroom because the little rat can't be more than 5 feet from mommy whether he is awake or asleep - or else he gets up looking for her and he is TOO STONED to find her so he just sits there looking weird. 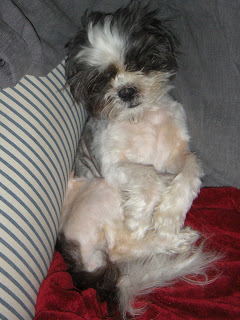 This was this morning after sitting on the ice for a while -  we all thought this was a pretty cute position for him.  Now he's back in the cone and back to sleep.

Please keep paws crossed that this time he gets well.

Oh - and TANK - we're trying the new dynamic template - we're not sure we like it!  Does anybody like it?
Posted by Checkers & Chess 11 comments:

So much for feeling better 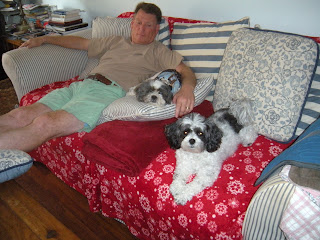 Poor Chess,  one of his stitches broke and we woke up to lots of blood.   Mom rushed him to the vetty.   They glued him together and watched him for a few hours.   Mom wouldn't allow surgery for today where he would have to stay with NOBODY there.

He's on major dog watch along with more antibiotics, anti-inflammatory  and pain meds.  He goes back Monday morning at which time they will decide on whether or not they have to do surgery to see what is in that sack hanging back there.  Not much chance he will be getting out of the cone for at least another week.

Mommy is not a happy camper and has written a blistering letter to the Shelter and the Vet who did the neutering.  She believes that if they watched him in the first place this never would have happened.   It's not usually a good idea to make mommy mad, especially about pets.

Hopefully she will calm down before the next City Council meeting [the City owns the shelter]  Otherwise they will be in for a real lecture from her. 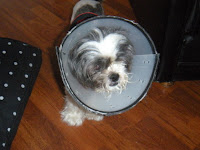 Last night I was just shaking and shivering so my big brother Checker loaned me one of his fleece outfits...It was a little long on me but it sure kept me warm through the night.  It was designed and made by Mommy's friend Sharon at Try Love Designs in case you might want one!

This morning I took my very first trip out [other than the vetty].  We went to Panera Bread.  I had to wear my cone and they didn't take the cone off because they worried I might lick or bite at my stitches as I sat in the stroller.

Checkers got to sit in the chair.  I think he might have been asking for treat, but, I don't think they were giving any out  :-(

I am still in the cone - but also looking for a treat!

They let me down on the ground for a little bit - but still in the cone!

Checkers got himself all tangled up in the chair.  I don't know if he's very smart! BOL

I made my was over to visit with him

Check this out - they took us to the park for walkies and took my cone off!

Checkers was on a much longer leash than I and he got to go to the grassy area.  The grass was wet so they were worried about my stitches as they are the dissolvable kind.

But, then, by some miracle they let me into the grass too!

I keep trying to get Checkers to pay attention but he always looks away.

We're making progress at getting closer -

I got a quick sniff of him!

After this we had to go back to the car.  Checkers was really wet and dirty on the bottom and nobody wanted to pick him up and touch him.  When we got home he had to go straight to the bath.  Now he's all clean and smells like lavender.

Mommy says that I stink and she can't wait till I can get a bath.  But that will not happen before next Tuesday.  I don't think I'm looking forward to that!

Well friends,  I think I'll go out on the deck to enjoy the afternoon.  Maybe they'll take the cone off again later.  One can hope!

Checkers & Chess
We are Checkers the Peek-A-Poo & Chess the Shih Tzu and just as cute as we can be. We love being with our mommy and daddy and stay as close to them as we can when we're at home. We like to make friends online so - welcome!